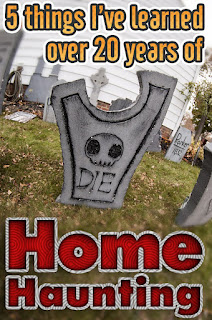 I can't put an exact number when asked how many years I've been home haunting.

When I was a kid living in Eastlake, Ohio, still prime trick or treating age, I would take the white light bulbs out of the ceiling lamps and in would go those awful incandescent black lights. My Halloween McDonald's buckets would be weighted down with rocks and dozens of them (from multiple years of collecting) would leer out at you. One year I even took 14 large pieces of paper, wrote out "Happy Halloween", letter by letter on each page, colored them in, and hung them along the front of the house. No year was complete without my Bayshore cat and pumpkin blow mold in the middle of the bank of windows.

So even before I was too old to actively participate in Halloween, I was already all about the total immersion of the season. There were a couple years where my brother was still TOT'ing and I just walked around. In 1998 I played "Don't Fear the Reaper" on repeat (yes for 2 agonizing hours) and screwed a red light bulb into the porch light and handed out candy in makeup. It was so basic and kids dug it!

New Eastlake haunted house in 1999. This year I added a strobe hanging out of a tree, and a rectangular pool with dyed red water and a pond fountain I had lying around. More makeup and there were so many people coming by word of mouth that I had to take a trip to Drug Mart to get more candy mid-way through! This is the year I discovered the compendium of Halloween home haunting and one of the earliest internet resources in existence, the Halloween Monster List. I actually considered making a torture board that was made from poster board and ice cream cones covered in aluminum foil. Proof everyone begins *somewhere*.

2000 through 2002 I haunted in Willoughby, Ohio. Small yard. Started really building props (although the first electric chair was held together with a lot of hope and not much else). Had a guillotine (used until 2017), wood tombstones, a few foam grave markers, a "fountain of blood" which wasn't the rectangular inflatable pool, and my wood toe-pincher coffin.

2003 until just this year, 2017, our Euclid Halloween haunt has been at either mine or my mom's house. They back each other, so one year, we used the connecting backyards. I really meant for this to be a shorter lead-in for the real purpose of this article, five really important things I've learned being a home haunter. Onward!

By spaces, I mean storage and haunting grounds. Halloween shouldn't interfere with car parking or accessing things all spring, summer, and winter. Build and purchase with both spaces in mind. Don't underestimate a well lit, small prop. A graveyard with a corpse or two.

The bigger they are...

Ok so this is piggy-backing off the first point, but I'm a living, breathing, regretting example. I've built electric chairs, guillotines, and fountains of blood. These kinds of props, while towering, take up a lot of space and after the sun goes down, most kids are too busy looking around for the monsters (you, and your understanding friends) to be impressed upon by a guillotine. And you have to store it all year. Resentment will build.

The fountain of blood is by far the most hated prop in my book. It was enormous, heavy, required water, and sometimes fell over. If you have a fountain in the front yard of your mansion, sure, use it. If you live in Ohio, it's too cold anyway. And remember... the bigger they are, the harder they fall. Over. Water. Everywhere. My God the Children.

I'm not anti-fog. I own 4 and have had at least 3 that are in fog machine heaven now. We ran three this year, and one was a self-proclaimed "ground fogger" that took ice and low lying fog. It laid a little low. A little.

In all my years I've yet to build a real fog chiller. This is our goal though, when we do build one: Makezine Ultimate Fog Chiller.

Maybe this will help? Ideally I'd love to have fog, chilled, rolling out a long tube at intervals. Fog that truly creeps low and seems to cover the ground just an inch or so up. Is this possible? Again, location is important. It's nearly always windy on Halloween night, so most fog is gone before anyone sees it.

Point is: Fog won't make or break your yard haunt, unless you need it for lasers or something.

I'm not the best when it comes to scaring people. My pro-tips: Get into a costume that's comfortable. Guy loves to jump around in his jester costume and he rocks it and scares everybody. I feel like a dope. I'd be most comfortable in a mask, black hoodie and jeans. Don't say anything, just get in low and close. When the victi--err, heh, kid turns around, guaranteed scream.

The two most successful props in all our years of haunting are, without a doubt, our baby rotisserie and the air cannon we finally built for 2017. I don't know what the appeal of the baby rotisserie is but everyone loves it, says how much they like it, year after year. And the air cannon, well, build one, stash it under your table where the treats are being handed out, and hit the button... watch 'em jump! This one spooks everybody equally. It even got me a couple times, and I know it's there. 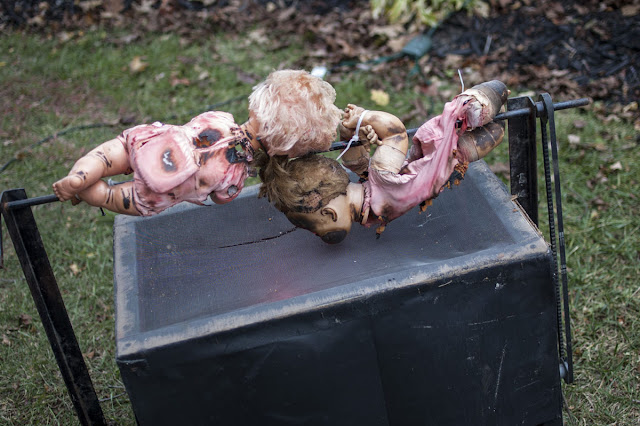