I was trolling some local Euclid (Cleveland) newspaper archives for something unrelated to Halloween, but the Halloween Gods were smiling upon me as always, and gave me some nice eye candy PLUS Bayshore adverts!

Everyone is coming to Smith’s Annual  Hallowe’en Party, Thursday, October 28, 1965. Smith’s was a restaurant located near East 222nd St. at Lakeshore Blvd.

Whoa this moon/owl/grinning jack-o-lantern smacks of familiarity! But Lesser & Lesser on East 185th St. had prices that were too low to advertise AND free apple cider and donuts! 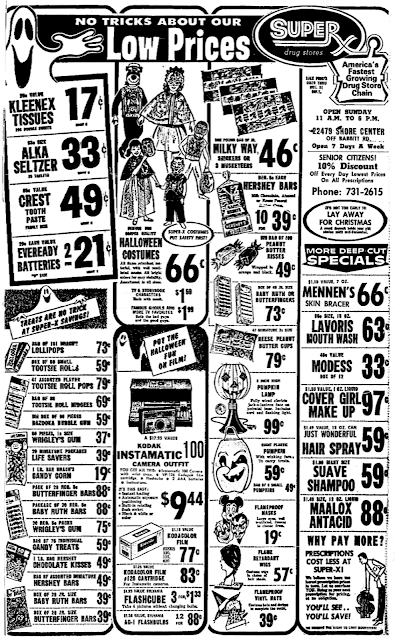 UGH so here’s where my sticks get unraveled… Not only is candy cheap but so are BOXED COSTUMES and AHHH BAYSHORE INDUSTRIES pumpkin lantern and bucket. Now I have both of these but I get sort of twitchy thinking of walking into SupeRX in 1965 and being able to just pick out all this great Halloween stuff… ldskjf. Sick.

FYI If Candy were still this cheap I would weigh 999 lbs.