I love the Halloween pails from McDonald’s. Growing up, I had a collection of them, and year after year they were molded 1986 into the bottom. I just had them stacked together, lids going everywhere. I’d take them outside, place them around the front of my house and put a rock in each one so they wouldn’t blow away. It was one of my first efforts at really going all out for Halloween, and they have a special place in my heart. 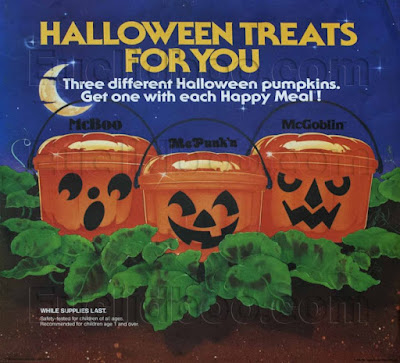 Now, being that they used the same mold, people on eBay always sell their buckets, even if they’re witches or ghosts, under 1986. The first year of the buckets were all three pumpkins. McBoo, McPunk’n and McGoblin.
McDonald's Happy Meal Buckets Pails 1986That is the translight for the first year the McDonald’s Halloween premium buckets were a nationwide thing. In 1985, McDonald’s also released 2 other pumpkins under the name McJack and McPunky. McJack had the McGoblin face and McPunky, the McPunk’n.