There weren’t any pails to be seen for Halloween 2000 (gasp, ikr). Instead the toy premiums were little creatures called Monster Crazy Bones. 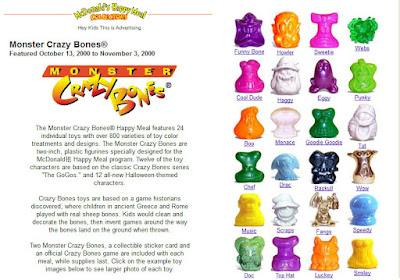 October 3, 2000 (Oak Brook, IL) — The largest collection of Happy Meal toys ever is hitting McDonald’s restaurants on Friday, October 13, 2000. Monster Crazy Bones, a larger version of the popular retail toys, are being introduced exclusively at McDonald’s restaurants nationwide with over 800 varieties of toy color treatments and designs. There are 24 Crazy Bone characters that come in an array of different colors making up the record-breaking collection.

Customers can buy a Happy Meal at participating McDonald’s restaurants from October 13 – November 2, and receive two Monster Crazy Bones, a collectible sticker card and an official Crazy Bones game with their meal, while supplies last.

“McDonald’s has teamed up with Toy Craze, Inc. to bring kids a different kind of toy,” said R.J. Milano, Vice President of U.S. Marketing, McDonald’s. “Kids can trade, collect and play any number of games with Monster Crazy Bones which we believe will create a Happy Meal experience like no other.”

Crazy Bones toys are based on a game historians discovered, where children in ancient Greece and Rome played with real sheep bones. Kids would clean and decorate the bones, then invent games around the way the bones land on the ground when thrown.