The story of the Terror Carolers. 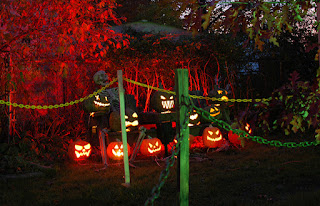 Singing pumpkins to entertain and bewitch the Trick or Treaters this year. That's on the agenda but..

We were stuck. We wanted 6 fake pumpkins, something we could carve, that would last a while, that wouldn't cost a small fortune. Surprisingly, searching the Internet didn't return a whole lot. I found something called Funkins which sold for about $25 a pumpkin. A PUMPKIN, for fake foam pumpkins!

Even on sale, we were looking at $84 for 6 pumpkins, and that meant 6 pumpkins that all looked the same.

Yeah... no. Everyone has seen the amazing Stolloween, and I think most have been intimidated to even try. I know I was, he makes it look so easy! That said, we really had no choice, so we gave paper mache pumpkins a try. I'll spell out how we did it, and I think you'll agree, it was a spooktacular (Sorry, I couldn't resist & I'm kind of lame like that) idea. 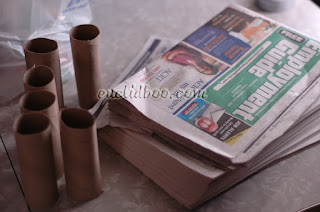 We used the same paper mache recipe as the last batch of paper mache pumpkins we made last year. You remember, the vintage ones. Yeah, those. We took grocery bags, filled them with crumpled up newspaper, tied them up, and used tape to make "grooves". Toilet paper tubes provided the shape for the stems. Basically, they oughta look like a pumpkin made out of bag and tape at this point. 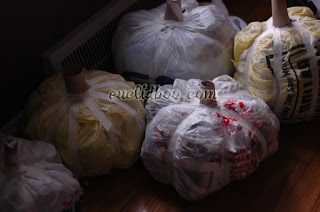 Now that you have that done, go on and make your paper mache glue and tear newspaper into long strips. For life sized pumpkins, we went and did 3 layers of the strip, thoroughly letting each layer dry. This took us about a day, starting in the afternoon. Get out a box fan to speed things up. 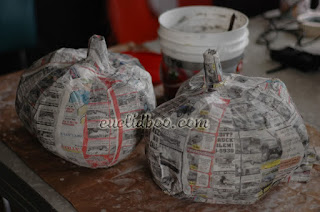 Now you're going to have to make your paper mache clay. We used 6 cups of flour, 1 bottle of elmers glue, a cup of liquid starch (1 cup of water + 1/4 cup of corn starch). Mix that up and add some GreenFiber Natural Fiber Blow-In Insulation. A huge cube cost us $7.25 from the Home Depot. Use as much as you want until you get a thickness you like. Apply clay to just the tops of the pumpkins. Note where you're going to cut your eyes, as this stuff is VERY difficult to cut through. Drying takes a while but we found a heat lamp really helped things along. We got a tiny bit of sun that helped us out too, but late September in Ohio = little sun. 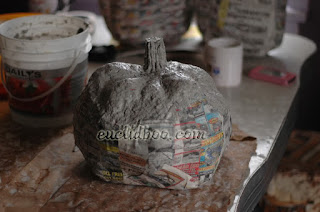 Onto the the next day. Now that the tops are dry, cut a circle in the bottom of your pumpkins and yank out the paper guts, and the bag too. We left our toilet paper tubes in place. 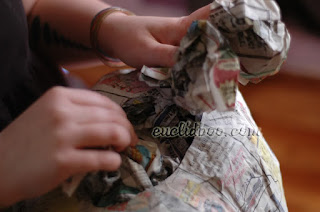 Not much to see now. Carve your face, cut some thin cardboard to line your cuts with (think of depth for the eyes and mouth) and get some more clay going, and slather it on. Let them dry more. 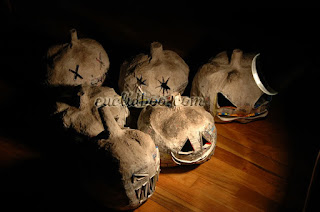 The one up front? He was named "Lampy" shortly after he made his Facebook debut. 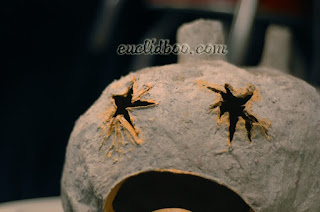 We painted the insides of the fake pumpkins orange. 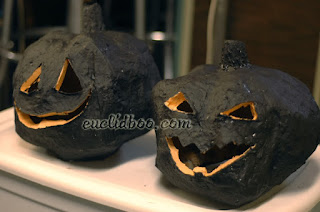 And then we painted the outsides flat black, covering everything well. It all comes together right now. This is exactly one week from when we started. Break out some primer and dry brush your surfaces. 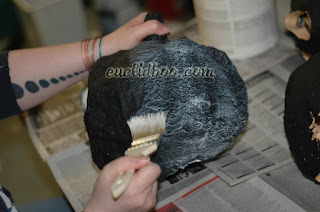 That takes about 5 minutes to dry. Now get artsy! I dry brushed as to not overkill the entire project. A little brown, yellow and orange was all I needed. 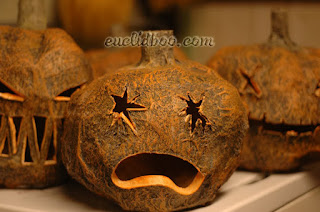 And some detail, too: 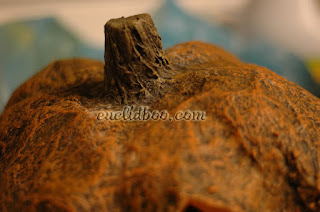