Who doesn’t like a meaty corpse that makes everyone grimace a little bit when they see it? 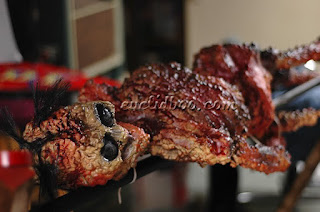 Blucky is a nice skeleton but scary he ain’t. Let’s change that by transforming a plain Blucky skeleton into a Burn Victim Blucky!

Everyone has a technique and here’s ours:

I didn’t cut Blucky up and rearrange his face at all, I just covered him in expanding foam. This stuff is fun as long as you’re wearing gloves, it really does expand like crazy and moving it around while sticky allows you a nice amount of control. Go crazy, just not too crazy Don’t crush it.

We waited for Blucky to dry before we went at him with 2 cans of spray paint, black and a red primer we had laying around. As you can see, you don’t need any fancy air brushing to make him look charred. It’s quite easy and took about 10 minutes.

Later on we cut some black hair from an old Halloween wig and glued chunks to his head. It really gave a nice effect, considering it was an afterthought, and it actually looks kinda crazy on him.

So there you go. A few bucks and a few hours, and you have a very unique burned Blucky, perfect for whatever, including your Blucky’s Annual Barbecue!