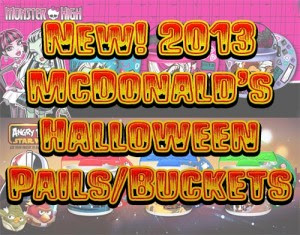 So it appears as if fans of McDonald’s Halloween pails can breathe a sigh of relief – there are six new buckets this year. In keeping with the male/female kids meal theme, there are three Angry Birds Star Wars Buckets and three Monster High buckets. That means there are also twice as many, with probably two being available each week.


So I’m not super excited, because I like them being pumpkin-ey. But I’m also 33 years old and still collecting kids meal toys.

Here’s a first look at the 2013 Halloween McDonald’s pails/buckets/toys:

What do you think? Will you be making a trip or three to to the golden arches to collect the 2013 Halloween pails? Or are they a little too non-faithful to the original buckets (that by the way, the aging internet 80’s kids LOVE.)?
Newer Post Older Post Home