Here it is, the second installment of our retro Halloween specials! This time it's 1985's Garfield's Halloween Adventure, which was originally called Garfield in Disguise. 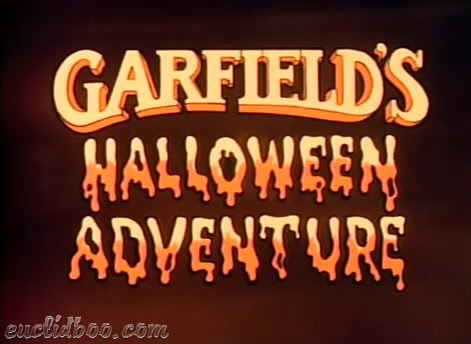 Aired on network television for the first time in October 1985, this is a special that ran pretty regularly, but of course, they just don't air them anymore.

Not sure why. Too much awesome for kids nowadays?

Honestly? I don't now who was scarier when I first saw this at the tender age of 5, the pirate ghosts or the man in the chair. Seriously. Read on and watch the entire Halloween special at the end!

Garfield is just finding out about Halloween for the first time. It's not so much the holiday he's into, it's the free candy. Naturally.

Well you know two sacks have got to be better than one... so he gives Odie some story about dogs helping cats and since Odie's dumb, he's completely on board.

I enjoy going through my Halloween stuff this much, too...

The most lulz-worthy line in the entire thing. Especially if you're 5 and named Jen.

TOT'ing is going pretty well, Garfield threatens a nice lady into giving them more candy, and everyone under their costumes is really a terrifying ghoul. You know, pretty normal.

So they decide they aren't getting a good enough loot collection and see some houses across the way. They take a boat, find a house and well, let the real terror begin!