There's always something that seemed like an awesome idea for my home haunt. Seemed being the key word. I'm going to highlight some of those here, my top 5 flops of yard haunting.

But first, a little background: We've been putting on the show here in Euclid, Ohio since 2003. Before that I lived in 2 other places and put on the haunt yearly, really since 1999. Aside from the collecting of Halloween things and anything else I blog about, I'm also a huge yard haunter. I love it, dressing up, giving the kids a thrill and getting compliments from the neighbors. I love it when people in the middle of summer ask about Boo. It's an awesome feeling to do something for our neighbors, just because we ALL enjoy it.

I got the wild hair the year after I graduated. Got all these ideas in my head. It has exploded from there.

It all started with the Monsterlist, which if you're any sort of haunter or extreme decorator, you have been to. It's the resource for Halloween tutorials and it's been there since forever. I love it.

Over the years, as my skills have increased along with Guy's, we've really put together an impressive little setup we are quite proud of. The byproduct of success, of course, is the occasional "what the hell was that?" We've all got them and here they are. I've rounded up my top five. Learn from my mistakes.

I wanted something to clearly mark off the entrance, even though there was no alternate way in. This was my lazy replacement for pillars, which I always sort of wanted to make.

I'm a woman, I improvise! I cut out felt (yes, the flimsy felt that kindergartners make things out of), printed letters, cut those letters out and then used the printer paper as stencils. Painted on the letters (probably with oil paint so I would surely be sticky for 3 solid weeks) and sewed a pocket into the back of the felt. Slipped rope through and hung it from the garage to a pole. Center supports are for the weak.

Guess what happened next! Not only did it look nothing like I thought it would look, it actually drooped and sagged and looked pathetic. Check out the gap like that often found in a fat mans pants. 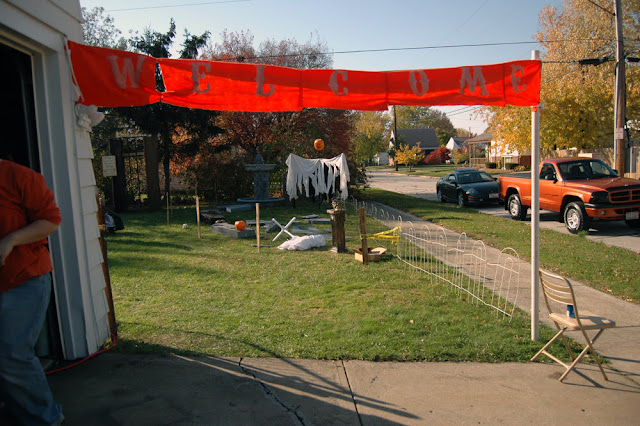 I don't even know where it ended up. I hope it's in the trash somewhere, thinking about what it's done.

This baby looked great in the tutorial I found. They did a beautiful job and I was completely chomping at the bit to make my own. I wouldn't say we jumped into this one without the right materials, but we had to use shiny paint (for stone?) and butchered some Tupperware in the making.

It looks ok... not at all the stunning piece I was hoping for. Now the fun parts: the pump jammed all the time. Our flower box base that acted as the water reservoir was too big and we were stuffing odd bits of foam and plexiglass in there (HAY WHYS THE PUMP JAMMING LOL). And of course it never felt the desire to actually stand up, and even though floppy tombstones are always so effective, we tied it to a tree. HOW SPOOKY.

The best part is yet to come: no matter where we placed this thing, surrounded by lights like some 17-year-old starlet, nobody ever noticed.

In the spirit of the tombstone, we also decided to make a haunted TV.

Actually, we saw a huge console on the curb down the street, so we walked down there and rolled it back during mid afternoon traffic.

Guy gutted it, we put the fake screen in, which was nothing more than some shimmery fabric that had somehow avoided the 80's/being turned into spandex. Add a foam head and none other than a Saturn windshield wiper motor and voilà! a haunted television.

This prop was less problematic than the tombstone, it wasn't tied to anything but it got the same result: no one ever even looked at it.

I kind of blame being outside for this one. Maybe.

This one would have been fine, really, if someone hadn't come along with their panties in a bunch. Let me explain:

I wanted a cheap scarecrow for 2004, just for the atmospheric element of one. So we grabbed 2 pieces of scrap paneling, nailed them together, stuffed a dummy and gave him a pumpkin head.

That was it, I promise.

Setting up Halloween day, a woman stops her car (I live on a very busy road) and gets out, starts gnawing on my ear about Peter. Can you guess what her issue was?

This conversation between us went down in flames before it really had a chance to get going as I had a million things to do and also, IT'S A FUCKING PUMPKIN NOT JESUS.

She then gave us window clings for the local Christian Cleveland station 99.5 the Fish. One was stuck to the stop sign on the corner of my house until some time around 2007.

5: I wish the electric chair was real

I can't recall if this idea was ganked or pure genius. I can't even remember who thought this would be a great idea. Which is fine as no one has to pay if I can't prove who birthed this idea: A car horn triggered by a board that's pushed when someone sits in the electric chair.

The kids took a half a millionth of a nanosecond to figure out this made noise - and a lot of it - and take full advantage.

Do you know what it's like to want to start tossing other people's children in a fit of horn-induced rage?

I think Guy may have pulled the power to the horn between the tricking or treating 2005 was even a thing of the past.

I have a couple of others that could have really deserved an honorable mention. It's a delicate balance that must be struck when you're limited by storage space and cash flow whilst still having to make things that scare children in an out-of-doors environment, large and attention-getting without being physically interactive.

This is why when we hit on a good idea, we share :D