During the Halloween 1989 season, the Mars candy company sold (I believe) 2 plastic characters full of fun size chocolate bars. In 1990 there were 3 sold.*

*I am completely guessing here. In my travels, I've only found the goblin stamped 1990.  The 1989 ghost and pumpkin are different from each other.

I had all three, and I remember hanging them up every year, because they were good sized and had nifty faces. I got them from Twin Valu grocery store in Euclid, Ohio, long before I actually lived in Euclid.  They came filled with candy bars.

Like I said, there were 3 different containers.  The Snickers ghost, who was a white ghost with a typical ghosty expression.  You know, he looks like he's moaning and being otherwise scary.

Then comes the Milky Way pumpkin (Jack o Lantern), who in contrast is quite happy looking.  And he was filled with Milky Way, so he automatically wins.

Anyway, the third was a green guy who I assumed was some sort of goblin, as what else is green really?  He had 3 Musketeers bars.

To make a very long story incredibly short, I moved and had to leave them all behind with a lot of other things.  So in my eBay stalkings, I'm very slowing starting to get things back, and last year (2009) Guy and I were able to track down the 1989 Snickers ghost and the 1989 Milky way pumpkin.  This year I was able to get the 1990 versions of the Snickers ghost and my 3 Musketeers goblin!

I'm not posting this so much as a happily ever after type thing, but because I googled last year extensively and this year as well, and I actually found even LESS about these premiums this year, so I wanted to put it all together in one spot, along with all the information I know (Mars Inc., 1989, lids are removable and have a thin rope in place so they may be hung or used as trick or treat pails, I would assume) and some pictures.  These were really neat little Halloween critters and I'm pretty sure I'm not the only one out there who remembers them.

Here's a shot of my two guys: 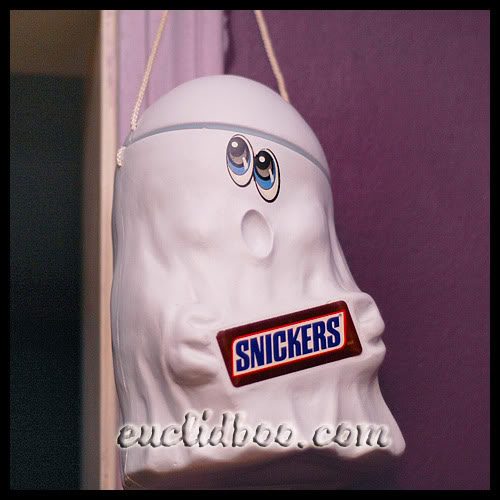 My Snickers ghost, being quite ghostly. 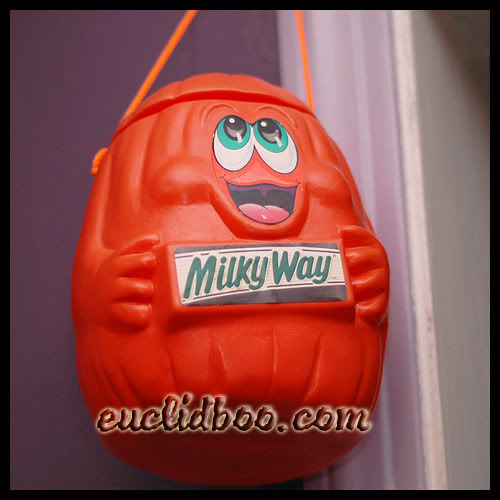 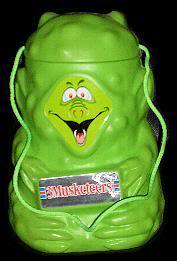 ETA: I contacted Mars about these, hoping to get some information, anything really, but I didn't get too far:

In response to your email regarding SNICKERS BRAND, MILKY WAY BRAND, and 3 MUSKETEERS BRAND.

Thank you for your email. Unfortunately, the information you requested is not available.

Have a great day!
Your Friends at Mars Chocolate North America

2019 update: I did some historic newspaper browsing and what I found really backs up my theory that only the pumpkin and ghost were sold in 1989, while the goblin was added to make the trio in 1990. 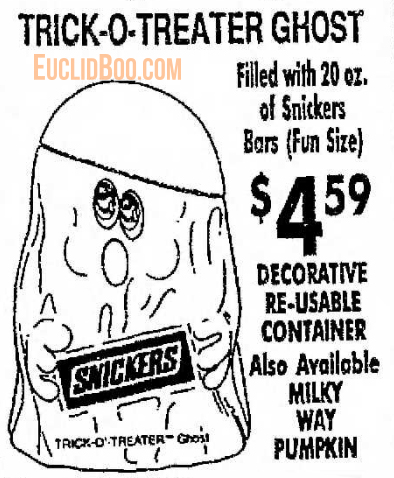 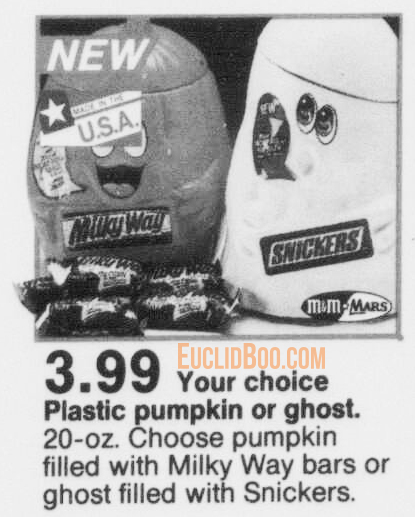 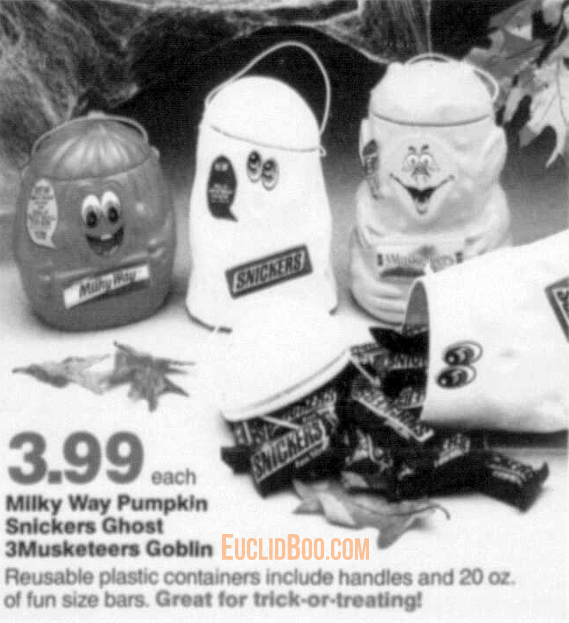