What: Blow mold jack o lantern on a black cat, 14 inches tall. Has 2 triangular eyes with raised circles in the center, a pronounced triangular nose and a smile with 2 buck teeth. Sat upon a rather freaked out looking cat.

Why: I always thought this blow mold pumpkin was the most unique looking (out of the dozens of other blow mold Halloween characters out there), I sort of found it down right ugly when I was a kid thanks to the buck teeth, and that's why I think I like it so much now. It's kind of cute because it's so awkward looking. 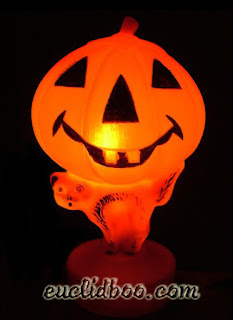 I wondered about this blow mold pumpkin because unlike a few others I have he has no production stampings and no trademarks of any kind. I do know now it came with the light, which I suppose makes sense. It turns out there are a few floating around out there with the original stickers (yes, stickers) still in place that give a little bit of manufacturing information. 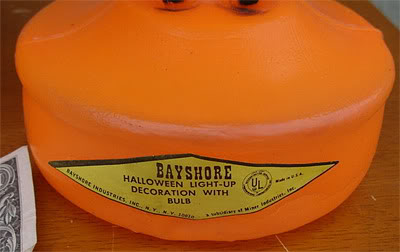 The ONLY production markings on the entire thing.

Bayshore Industries opened in 1946 by Alvin L. Gursha in Elkton, Md. They ran into financial problems and were absorbed by Miner Industries, located in New York.

According to Eugene Swee, president and chairman of the board of Miner Industries, Alvin L. Gursha was to be president of Miner's Bayshore Division.

The bits of information I did find about the business deal are from the Amsterdam Evening Recorder, July 24, 1962.

I could find little else about Bayshore. From what I'm led to believe, Miner Industries, whose offices were located at 200 Fifth Avenue, Room 234. NY, NY 10010, filed chapter 11 bankruptcy in 1978.

This makes it pretty difficult to contact the company for any sort of history or patent sketch like I was hoping for, but it was interesting digging up the history nonetheless.

Judging by the fact that Bayshore had become Miner's subsidiary by 1961/1962, that must mean this jack o lantern/cat blow mold is POST 1962, and since I believe Miner went under completely nearly 2 decades later, pre 1978. 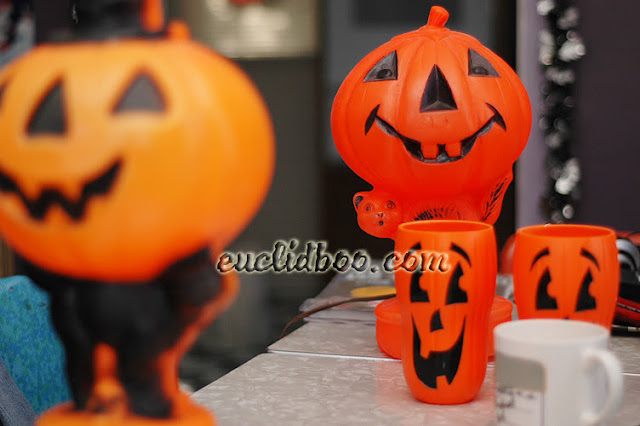 I've found many of these on eBay so they are by no means rare at this point in time. I had one as a child and actually found the one I have now in the garbage, looking very sad. Ones I have found on eBay with the old price tags in place said they cost a little over a dollar, retail, when new.

The jack o lantern/black cat blow mold can easily be found on eBay for about $10 before shipping. Or if you have a very keen eye on garbage night.

Interesting website FULL of stuff about not just Bayshore blow molded figures, but all the big names, Union, Empire, General Foam and more.  Check it out if you've got a couple of hours to spare: http://www.blow-molded.com/Bayshore_Industries___Archive.html