Halloween Costumes That’ll Make You Laugh (Or is that cry?)

Nightly I get on the Internet and look for neat Halloween costumes, preferably on the cheap. 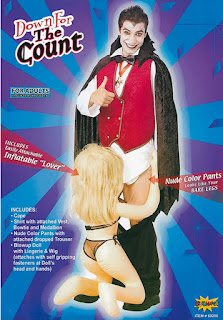 So I give you a few of those here.  Are they treats or tricks?  You be the judge.

When Dracula gets too boring, why not don Fat Dracula instead?  What he lacks in being a charming, intimidating blood thirsty monster, he makes up for in fake lard, aroma of old cigars and off color jokes.  (Please note, those last 2 things don’t come with the costume, they’re included with the guy wearing the costume.)

And speaking of off color, why isn’t Fat Dracula’s stomach as white as his face?  Things like that really bug me.  I can’t help but think if Dracula really let himself go his stomach would at least still match his puffy, greasy cheeks.

Finally, can he fly when he turns into a fat bat?

I really wanted to be a piano for Halloween but it would have been too hard to cut 52 keys into my flesh.  Disappointed as I am, I’m still not opting to go anywhere as a guitar with legs and arms and a face where the most commonly used frets are.

Maybe we’ll get lucky and some guy dressed as Jimi Hendrix will pick her up and smash her into someone else dressed as an amplifier. 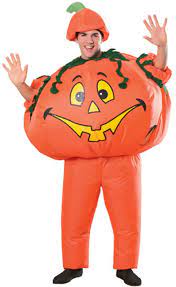 This costume would have been squeeze those cheeks adorable on this guy – 28 years ago.

Seriously, I’m surprised this costume has leg holes.  He couldn’t find someone to just carry him around all night?  I bet he’s wearing a diaper.  Picture him going into the quicky mart to buy beer.   Does he get carded?  Do they figure it’s some sort of robbery and just give him the cash?

I hope for his sake he’s going to a church party or some place where everybody will be nice and accept his creepy costume and not roll him into a lake or in front of a moving car. 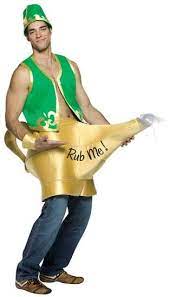 But they got the perfect guy to model it.  I live across the street from a house with lots of guys aged about 25 years.  To the neighborhood it’s known as the celebration house of linked meat products.  They own pit bulls and sag their drawers.

I imagine this year there’ll be a whole bunch of sicko genies running around, in and out of the sausage party house yelling, “IT SAYS RUB ME.  HAHA YEAH.”